The processing company KCCL was processing cobalt in a remote area of Uganda which did not have electrical power from the national grid.  A hydroelectric power scheme was established to generate 10 MW using water from the Mubuku River.

Water was diverted out of the river from a weir into a steel delivery pipe and inverted siphon to discharge into a headrace canal.

The flow into the canal had to be regulated automatically.  The site is very remote and manually or electro-mechanical valves could not be relied upon.  The control mechanism had to be totally automatic.

The consultant selected the FDS automatic diaphragm valve for this purpose.

Two 1500 mm diameter automatic diaphragm valves were installed into two discharge chambers.  These chambers also incorporated an area for desiltation before flowing into a canal.  The water level in the canal is controlled by a single float valve.

The radial discharge from the valves prove to be an effective energy dissipator thereby allowing sediment to settle out in a shorter length sediment trap than would normally be the case.

These valves have proved adequate to control flow as well as handle large amounts of sediment emanating from the river. 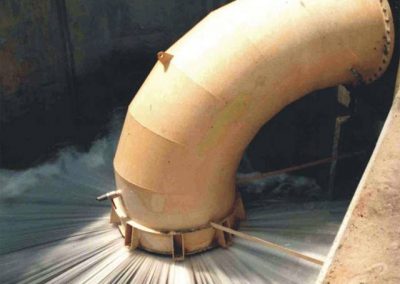