The Robinson Canal drains stormwater from 8 km2 of central Johannesburg CBD. With each rainstorm a substantial amount of litter and debris is carried down the canal which was previously deposited as unsightly piles of litter on the banks of the Klipspruit stream.

In addition to litter, the Robinson canal also carried raw sewerage from overflowing sewers from the city which continued into the Klipspruit and through the township of Soweto, giving rise to health problems.

An automatic self regulating canal gate was installed in the canal to divert stormwater through a series of specially designed screens before re entering the canal, essentially litter free.  The regulating gate is designed to remain closed for all flows up to the 1:15 year storm event and then to open for larger flows in order not to cause the canal to overflow upstream.

The low flows are intercepted by a drop catchpit and led into a settling chamber where oil is removed.  The low flows are then controlled by an automatic diaphragm valve before discharging vertically into the main Klipspruit outfall sewer, some 20 m below.

The litter trap proved to be very effective.  On average 70 to 100 bags of litter was removed after every rain event.  A considerable amount of oil was also removed with the litter.  The raw sewerage has also been effectively interrupted in the low flows. 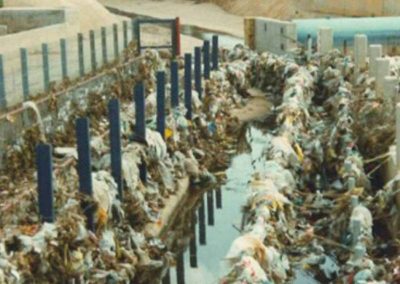